By Cristina
Posted September 20, 2018
In Uncategorized
1

BOTSWANA | She is the youngest and most dynamic Minister in President Mokgweetsi Eric Keabetswe Masisi’s cabinet and recently visited the Chobe area to familiarize and motivate entrepreneurs in this wildlife and tourism rich corner of Botswana. The Minister of Investment, Trade and Industry, Honorable Bogolo Joy Kenewendo, is making a lasting impact in Botswana.

The Department of Co-operative Development’s Kasane office was and continues to be the main AKP partner in setting up and mentoring the Dipetsana Coop Women’s Bike Shop in Kasane. This department, which falls directly under Honorable Kenewendo’s Ministry, cleared an entire Saturday morning in July on the Minister’s busy schedule to meet the Dipetsana Coop.

It was a very exciting and encouraging moment for the Dipetsana Coop women and the minister ended up ordering one of the store’s own products, a table made out of recycled bicycle rims. Accompanying the Minister was the Assistant Minister of Presidential Affairs, Governance and Public Administration, also Chobe District Minister of Parliament Honourable Machana Ronald Shamukuni who bought a bicycle on the day.

To the Dipetsana Coop’s surprise, an invitation has been extended to them to form part of the Ministers’ Delegation that is visiting Nigeria for the 12th Africa Co-operative Ministerial Conference in early September. It is at this conference where Honorable Kenewendo will be handing over the Chairpersonship of the Conference, which Botswana has been trusted with since 2015.

The invitation has been seen as a big honor by the Dipetsana Coop women, and Narufu Kwesi, Chairperson of Dipetsana Coop saying “as a fairly new Coop, an invitation by the Minister to represent Botswana at such an international event is overwhelmingly exciting!” 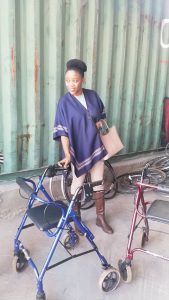 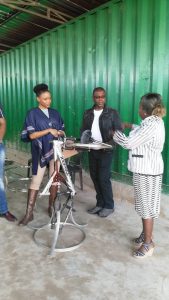